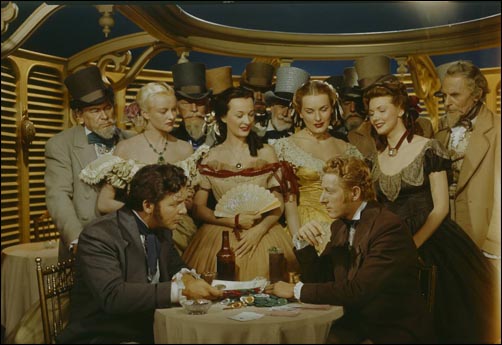 In 1936 James Thurber published a short story in the New Yorker about a man whose life was so dull he took whatever opportunity he could to disappear into his own, much more thrilling, imagination where, be he a fighter pilot or surgeon, he was always the hero. The Secret Life Of Walter Mitty (1947, 110 mins) takes this premise and expands it greatly into a wider narrative.

Danny Kaye stepped into the shoes of Walter Mitty, presumably because his talent mix (acting, slapstick, and patter songs) lent themselves to a role that, come a daydream, could see Kaye do anything, be it dancing, falling over, or knocking out a tune. And this film, as a vehicle for Kaye, let’s him showcase these skills, although this occasionally bleeds into indulgence, the narrative peppered with light entertainment longueurs.

Walter Mitty is a downtrodden fellow. Dominated into adult life by his mother (Fay Bainter); stumbling headlong into an unsuitable marriage with Ann Rutherford‘s naive Gertrude Griswald (with Florence Bates as a dragon of a mother-in-law waiting in the wings); and in the employ of a man (Thurston Hall) who happily adopts Mitty’s ideas while bestowing none of the credit. With all this going on around him it’s no wonder he disappears into regular reveries, his active imagination no doubt fuelled by the pulp magazines he has, for ten years, proofread for a living.

While imaginary worlds are Mitty’s retreat from his henpecked existence it turns out to be the real world that offers him the incentive to be the hero of his dreams. A chance encounter with Rosalind Van Hoorn (Virginia Mayo) leads him into a crime caper involving a black note pad and the men (among them, Boris Karloff) who will stop at nothing — even murder! — to retrieve this MacGuffin.

While it mostly works as a story in its own right it’s perhaps debatable whether it should have retained the title given how it departs from the conceit while simply appropriating the imagination element. Admittedly, a story spanning a few pages was never going to form a script in and of itself, however the expanded story could at least have remained true thematically. Instead, The Secret Life Of Walter Mitty delivers a story about a man discovering, in the real world, the ability to overcome the dreamy nature that has both comforted him and held him back. It’s a big step from the original, where, regardless of the heroics explored he was, in the end, Walter Mitty, and no amount of dreaming would ever change this dull fact.

Themes aside, it does work as a story and the film happily plays for laughs. Repetition is key, with the same situation approached time and again, each instance developed further to enhance its comedy, such as meetings at the boss’s office. And when Mitty disappears into dreams he suffers the consequences of the world going on around him, be it others’ frustration at him for not following the conversation; or the juxtaposition of dreams and reality, such as when his riverboat gambler heroically scatters a deck of cards everywhere while, following this through into the real world, the result is anything but heroic.

In Thurber’s story the only way out of such a lack-lustre life was to turn and face an imaginary firing squad and hope for something better beyond. That is perhaps a reaction to the times, the story reflecting on the years of Depression that had preceded it. However, director Norman Z. McLean, is able to bring colour and joy to a post-Depression (and post-war) world, with Danny Kaye’s Walter Mitty given the chance to enjoy life. In the movie he has a favourite song — Stephen Foster‘s Beautiful Dreamer — which closes with a command to “awake unto me”. When Walter awakes once and for all things are looking up and the likelihood is that he’ll need never dream again to live an exciting life.