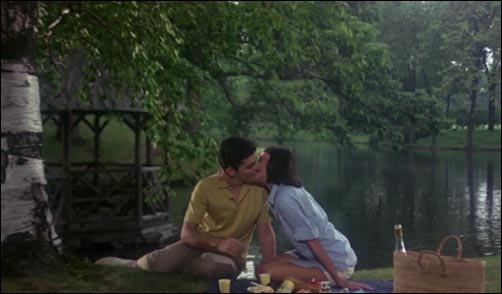 The summer of love — and free love at that — was two years gone but its echoes were still reverberating around the world. It was 1969. The year of Woodstock. The year of Easy Rider. Students protested with sit-ins; musicians with bed-ins. Goodbye, Columbus (1969, 101 mins) may as well have been walking on the moon with its wholesome students and concerns about premarital sex.

Adapted from Philip Roth‘s 1959 debut of the same name, it follows the summer relationship between Neil Klugman (Richard Benjamin) and Brenda Patimkin (Ali MacGraw), two Jewish teenagers in New York. When they first meet it is at a country club; Brenda asks Neil to hold her glasses while she swims he wastes little time in asking her out. The relationship that follows is quick to blossom, although issues of class rear their ugly head with her parents’ probing questions as to what he does for a living.

Neil’s working in a public library is a far cry from the other man in Brenda’s life — her father (Jack Klugman). He was once like Neil but through determination and hard work has pulled himself up into the nouveau riche via his own business. And in moving on up the money ladder (affluent suburb, big house, maids) he finds himself able to look down on others. The ultimate paradox of his family is their attempts to assimilate into wider society. They cling onto their heritage — evident at the wedding of Brenda’s brother Ron (Michael Meyers) — while simultaneously trying to hide it with nose jobs.

Neil, with his background, likewise can’t assimilate into the Patimkin family, partly due to their resistance to him. The mother (Nan Martin) is particularly hostile, questioning him about everything; while the father prefers a more pragmatic approach, recognising the relationship as merely a summer liaison that will end when Brenda returns to school. There’s sex aplenty (don’t let the parents know!) but, as in any coming of age story, some point has to be reached where a lesson is learned. In the case of Goodbye, Columbus it’s the thin line between love and lust.

While the film works well as story of two lovers who come to realise their relationship for what it is, it isn’t without some minor problems. At one point Neil goes to stay at the Patimkin’s for a fortnight. While it’s discussed, it’s never explained why he needs to and therefore disorients the story. Also, infidelity to Roth’s source creates a pretentious cartoon of Ron, the character who in repeatedly playing a recording of his school’s valedictory speech gives the film its title. Although it’s sprinkled with Roth’s original dialogue, it does occasionally take leave from the story, but presumably that’s the challenge of bringing a first person narrative to a third person delivery.

When Neil is at work a young black boy regularly visits the library to stare at Gauguin’s Tahitian paintings. “That ain’t no place you could go, is it?” he asks of the Pacific paradise. Swap Tahiti for the Patimkin family and there’s Neil’s issue foreshadowed. It’s refreshing to see a guy get the girl and lose her, not through any fault of his own, but because he never really had her. There may have been a summer of (free) love, but it comes at a cost.