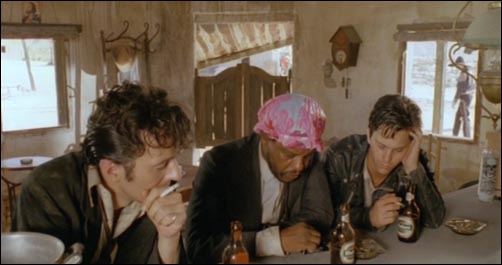 Given the chance to make ¡Three Amigos!, (1986) Alex Cox declined and instead made Straight To Hell (1987, 87 mins.), a rowdy send-up of spaghetti westerns, its cast peppered with musicians. Panned on release it has since achieved something of a cult status, filed under the so bad it’s good category. And while it really is bad, it is hard to approach it as a serious work, so is probably best taken in the spirit it was intended. Therefore it does have a certain entertaining charm but that still doesn’t make it good.

The story behind the film is arguably better than the one filmed. Following a successful gig in London in support of the Sandinistas, Cox intended to film a concert tour of Nicaragua featuring the bands involved. With funding not forthcoming and the artists already signed up for a month, it was easier to raise far more cash for a movie. So they went to Spain, filmed it, and the result of four weeks’ work produced Straight To Hell.

The brief timescale shows. While it’s evident that the cast are having a good laugh making it, the film suffers throughout. The plot rumbles along on a logic all its own and much of the cast can barely act, hamming it up at every opportunity. While it’s spoofing spaghetti westerns and gives nods to familiar tropes (towns with rival gangs; the undertaker having to clean up the stranger’s mess) it’s not really funny. Instead there’s the sense that it’s full of in-jokes between the ensemble, audience be damned. However, it does do something different by way of a genre mash-up, bringing organised crime into the western format.

After a botched job and a hurried robbery three hitmen (Sy Richardson, Dick Rude, and Joe Strummer), with a whining Courtney Love in tow, head to Mexico to lay low and escape their boss’s wrath. They bury the cash and hole up in a small desert town. When they eventually crawl out of a local bar, their story becomes as meandering as their drunken swagger. The coffee-swigging McMahon family (played by various members of The Pogues) are the resident gang and shoot out after shoot out ensues as other strangers come to town. Ultimately, everyone wants to get their hands on the buried cash.

At one point Dennis Hopper shows up, hands over a huge gun to the fugitives, and vanishes into the desert dust. It’s a seemingly random act, but it’s one of many moments that can be pinned to a wider plot, if obliquely. Sure, the viewer can infer from one scene to another at times what’s going on, but the treatment feels unfair due to a lack of information. Whether scenes were edited out or Cox and Rude weren’t too fussed at the lacunae in their script, Straight To Hell plays as if we are only privy to occasional glimpses of something more complete.

For all it’s stupidity, it’s hard not see that Straight To Hell can also have been an influential film. A young Quentin Tarantino must surely have taken one look at Strummer and Richardson here and jotted down notes that would later see homage in Pulp Fiction. While the film is a raucous espresso-fuelled mess, it can still be enjoyed on its own terms, whatever they may actually be.